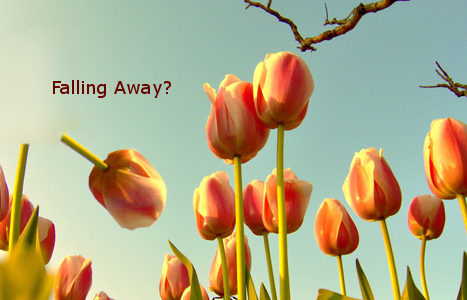 1 Therefore let us leave the elementary doctrine of Christ and go on to maturity, not laying again a foundation of repentance from dead works and of faith toward God,
2 and of instruction about washings, the laying on of hands, the resurrection of the dead, and eternal judgment.
3 And this we will do if God permits.
4 For it is impossible, in the case of those who have once been enlightened, who have tasted the heavenly gift, and have shared in the Holy Spirit,
5 and have tasted the goodness of the word of God and the powers of the age to come,
6 and then have fallen away, to restore them again to repentance, since they are crucifying once again the Son of God to their own harm and holding him up to contempt.
7 For land that has drunk the rain that often falls on it, and produces a crop useful to those for whose sake it is cultivated, receives a blessing from God.
8 But if it bears thorns and thistles, it is worthless and near to being cursed, and its end is to be burned.

This text is often used to support the thesis that true Christians can lose their salvation. The argument is here that the author is warning his readers of the real danger they face - that of spurning the grace they once accepted and thus being lost forever. Therefore it could not be the case that true Christians persevere until the end. Otherwise, if a Christian believed that he could not take a warning about falling away seriously, there would be no point in giving such a warning. Thus, the Calvinistic doctrine of the perseverance of the saints is false.

However, Calvinism has many places in apostolic teaching to argue for it's doctrine. But then how do you deal with the apparent contradiction of giving a warning. I want to argue that the answer is by appealing to Newcomb rationality, which we discussed in an earlier post/note: "Religious Luck and Newcomb Libertarianism"

True Christians who have received God's necessary and sufficient regenerating grace have been sealed with the Spirit and will endure unto the end. However, there are cases of people who receive many blessings from God but not regeneration. They receive good things from God but not grace sufficient to overcome sin. These do not remain faithful to God in Christ and leave the faith. These are actual cases that will happen but there are other cases were we see fruitfulness and steadfastness into the end.

In Newcomb's paradox, the fallen case is the case of someone who takes goes back and takes the second box before both boxes are finally opened, as if to think he can fool the wizard into believing he's a one box chooser by waiting enough time before taking the other also. Of course, the wizard cannot be fooled.

Similarly, the Calvinist knows he either cannot lose his faith or that he never really had an effectual regeneration but he dies not know which is true. But he would be encouraged to press on on faith since that is what a saved person would do now.

Just as the full description of a Newcomb's paradox case makes clear the rationality of choosing one box, so the assurance of perseverance is essential to explaining the choice to make sense of it's Newcomb-like character. So is the admonishment of the real cases of apostasy. 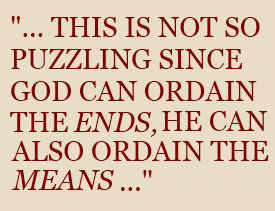 So because Calvinism is taken as true, the admonishment has force. And this is not so puzzling since God can ordain the ends, He can also ordain the means by which it is accomplished. Those who are saved are saved in part by hearing the warning of Hebrews.

That this is present in the text is clear from the context. The author is in the first verses encouraging the readers to move on from the preliminary matters that concern new believers and to make progress in love, service, understanding, and to keep going forward.

But then to reinforce that standing still as a newbie is not only regressive but also dangerous, he warns be describing an alternate hypothetical possibility that is actually true in some cases. There are some that have enjoyed the more superficial gifts of God, such as the fellowship of believers, the exposition of the Bible, even the touch of the Holy Spirit, or even some Charismatic gifts. They may have all this without the deeper work of God's Spirit regenerating them. So instead of enduring the walk away from God and His people. This is especially relevant here because his audience are said to have not yet moved on to the larger fields of the Christian life. They still revisit the first lessons of Christianity.

And this is important since it's clear from the last part of this section that "moving on" means serving and bearing fruit, the real signs of an actual work of God. The last verses bear a striking analogy to Christ's parable of the Sower, where some of the good seed lands on bad ground receives blessings like sun and rain but bears nothing useful and gets burned. But some seed is fruitful.

So it is true that both the assurance of grace in the saints and the failure of some seed to bear fruit and thus get burned, that warnings about final falling are real and genuine, and that the latter is true not in spite if but because of the former, plus the fact that there is no way for the audience to know which one applies to them prior to their choice. But in choosing to endure another day, they are accepting the description that they have been chosen for grace from the foundation of the world.
Posted by The Gnu at 3:46 PM